After purchasing land in 1950 from Calder Estates, the villagers held dances, whist drives, jumble sales, etc over the next 9 or 10 years to raise money for the building of the Village Hall.

A couple of Photos of the first bricks being laid taken by Fred Atkinson.

S Kilvington’s grandfather laying the first brick (Oldest person in the village at the time). 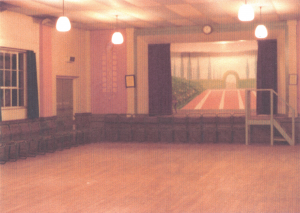 This is the original interior of the hall before the extension in 1979.