Sella Park, st. Bridget’s. By MARY C. FAIR.
Read at Penrith, July 7th, 1936.
Ordnance Survey 6″ to 1 mile, Cumberland 78 N.W. Lat. 54 ; 26′ 7″ Long. 3 ; 29′ 8″.
SELLA PARK is a mansion in the lordship of Calder k) (formerly within the manor of Great Beckermet) whose history is somewhat difficult to disentangle. Certainly the present house presents features which suggest that it has enshrined within the 17th century additions of Darcy Curwen (erroneously reputed by most of the older county historians to be the builder of the house) , remnants of a considerably older habitation including a 14th century pele tower.
The meaning of the name Sella is obscure; in older documents referring to the house this is written Sellow, Sallowe, Selowe Park which suggests that the meaning of the name might be The Park of Willows; unfortunately I am quite unable to discover any earlier reference than the end of the 16th century so that early forms of the name are unknown nor when the house became known as Sellow or Sallowe Park. In 18th century and early 19th century maps Sella Park as marked appears to refer to that area of the district which includes the hamlet of Yotten Fews, not only the house beside the river bearing the name to-day. Again in the Register of St. Bees (Charters 126 and 127, pp. 166, 167) mention is made of the sea grange of Calder ” to which the Great Road from Newton leads; there is thus the possibility that Sella Park was during the 13th century the ” Sea Lathe ” or sea grange of the monks of Calder Abbey as distinguished 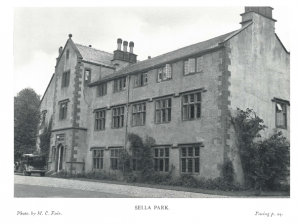 from their other granges which were situated on the moorlands inland from the abbey premises. It is known that ” the lordship of Calder ” was granted to Calder Abbey though it does not figure as belonging to it in the Survey of The Possessions of Calder Abbey, 1537-8 (Augmentation Office, Miscellaneous Book, ff. 95-100 ; 121-3) nor in the list of abbey possessions granted to Dr. Leighe. It seems possible however that at the Dissolution or earlier the lordship of Calder returned to the ownership of the le Fleming family who had originally granted it to the abbey. It (the Lordship of Calder) was held of the Barony of Egremont, and is now the property of the Earl of Lonsdale. The advowson of the ancient church of St. Bridget was appropriated about the middle of the 12th century to Calder Abbey, granted to the le Flemings at the Dissolution, and is now once more in the hands of the owners of Calder Abbey.
Denton in his Accompt does not mention Sella Park, giving merely a passing notice to ” Sellowfield ” as seated upon the brook that falls from the mountains by Calder Abbey, nor does Sir Daniel le Fleming mention it in his Description of The County of Cumberland. Edmund Sandford however in his chatty ” Relation of the Antiquities and Families in Cumberland,” published about 1675 calls ” Scella Park a pretty house hall; but neither parke nor deer about it,” a description which is copied by Jefferson in his History of Allerdale Above Derwent (p. 306). Traditionally Sella Park is always held to have been the Calder Abbey Deer Park and to have been intimately connected with the Abbey; the present barn is of modern construction, but exceptionally large and apparently stands upon the foundation of an older predecessor and many of the stones in its walls are of handsome type and have clearly been used in a substantial well-built erection of massive stone-work, possibly a great tithe-barn of the abbey.
The known history of Sella Park begins in 1592 when in The Memoirs of Sir Daniel le Fleming (p. 101) there is the entry: ” Tho. le Fleming of Sellowpark his mortgage of 5s. Rent in Conygarth,” etc. In our Transactions (o.s. Vol. V, The Curwens of Workington, by W. Jackson, F.S.A.), we learn that Sir Henry Curwen of Workington, on March 30th, 1594 bought in the joint names of himself and his second son Thomas by his second marriage the customary estate of Sellowe Park from Thomas Fleming who up to that time had been its owner and occupant; in the inventory of the Goods and Chattels of this Sir Henry Curwen who died in 1595 is the item under heading of Debts Owing By The Testator ” To Thomas Fleming {66. 14. 4.” possibly in connection with the purchase of Sella Park.
Thomas Curwen was born at Workington 1590 and was set on by his father Sir Henry as tenant of Sella Park where he died in 1653 and was interred at Ponsonby where there is a monument to his memory.
His son Darcy, aged ten years, was admitted tenant of the Customary Estate of Sella Park by Margaret, widow of Sir Henry Curwen (grandson of the Sir Henry who purchased it from Thomas le Fleming), part of whose jointure it was, and it was this Darcy Curwen who later made such extensive additions and alterations to the venerable mansion incorporating however in his rebuilding and extensions a good deal of the earlier house. He died in 1722 at St. Albans, Hertfordshire, and was succeeded by his eldest son Henry who was killed by a fall from his horse, aged 47 years in 1727. As he was unmarried his brother Eldred (born 1692) succeeded to the Sella Park estate as well as to Workington; he died in 1745. In 1770 the Sella Park estate was purchased by Mr. George Edward Stanley of Ponsonby Hall just across the river Calder in whose family it remained till recent years ; it was purchased by the present owner Mr. James McGowan from Captain Llewellyn. 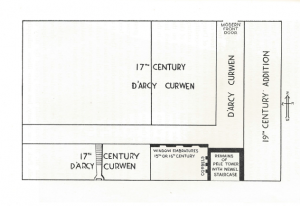 Sella Park stands on the west bank of the river Calder commanding a very ancient ford by which a line of road which may possibly be of Roman origin comes from Ravenglass and Drigg (passing through Blea Wath between Gosforth and Seascale where it was seen about 2 feet below the present surface of the ground), thence just east of Caernarvon Castle and crossing the Ehen probably by another ancient ford below the present bridge at Egremont nearly half a mile. It seems very possible that the building at Sella Park Ford was in early days one of the usual substantial thick-walled pele towers common to the Border district. Traces of this tower can be made out in the south end of the east side of Darcy Curwen’s Gable where there is a newel staircase ascending to the roof beside which is a remnant of a 14th century type window recess and seat. On the west side of this part of the older house, there are corbels, and on the ground floor, now inside the house, is a wall which has window recesses of 15th century type in what was in the early house an outside wall, built up by Darcy Curwen into his additions of the late 17th century.
He built some fine big rooms, a dining hall, a great chamber above, a spacious, shallow-stepped staircase, many bedrooms, accommodation which must have been very necessary for he had seventeen children. There is a 19th century still later addition to the old house where at the east end a small block has been built, thus masking that portion of Darcy Curwen’s reconstruction where the remains of the pele tower are situated, and making the elucidating of the plan of the house difficult to work out.
I have to offer very warm thanks to Mr. and Mrs. James McGowan for endless kindness and help during my study of their beautiful old house. It was hoped that Mr. McGowan would himself present the story of Sella Park to our Society, but serious illness unhappily 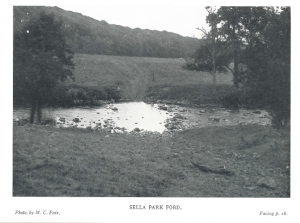 intervened and Mrs. McGowan has generously permitted me to publish these notes pending his recovery.*
There is a place-name Sella in Dunnerdale. Ekwall suggests for this sel ” hut on a pasture haugr hill.” Sellaye 1584, Sellowe 1624.
Source: Cumberland & Westmorland antiquarian & archaeological society.