Ponsonby Church dates back to the 12th century. 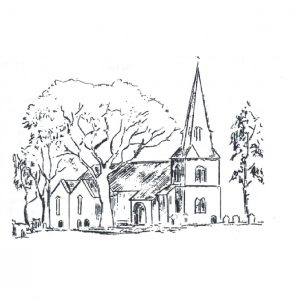 The Manor of Ponsonby. The manor was held in the 12th century by Punzon or Ponson who probably died in 1177. He had a son John whose son was Richard, father of Alexander, father of William. From them the place was named Ponsonby – Punzon’s homestead. William was married to the heiress of Haile and Ponsonby became the property of de Austwaite whose heiress Nicholas Stanley married.

The Stanley Family. The family of Stanley, one of the most ancient and best known in the kingdom, trace their decent to an ancestor said to be living from 1030 to 1080. Their geneology is too long to describe in detail in this booklet, suffice it to say that the name Stanley appears frequently in history of the county over the last 800 years.
The Parish. The priory of Conishead, Lancashire in Furness was given the rectorial or lesser tithes as well as the advowson of of the Church by John Fitz Ponson, this gift was made at a very early period. It was confirmed in 1256 named above. Conishead held the advowson until the supression of the monasteries. In 1689 John Stanley bought the patronage of the living, together with the tithes and the church land. The patronage has remained in the hands of the Stanley family ever since. The patron at the time of the updating this history is Mr P. Stanley.

The Church Building. The Church is an early English structure. The chancel arch dates back to about 1220. Since then there have been many changes. Sometime before 1840 the open oak roof was covered with a plaster ceiling. The ancient windows were replaced with modern windows and a tower with a low spire was added. In 1866 a vestry was built. In 1874 the Church was almost past repairing, so it was decided to renew the church fittings and to put a new roof on the building with the addition of a new spire. At the same time the height of the the walls was raised and the chancel arch re- erected on new piers. The present porch was added together with a new baptistry. The east window was put in at the same time. The restoration cost £1,800. In 1881 a heating system was installed but it is not now in use. In 1885 an organ was installed in the old vestry and the present vestry added.
Stained Glass In 1874 some small pieces of glass either from an older church or probably brought from Dalegarth Hall (the home of
the Stanleys) were arranged in a small window in the south wall of the chancel. The subject of the centre light in the East window is the Crucifixion with the Nativity below it. A small window surmounting the East window shows Our Lord in Glory. On either side are the figures of Saints John, Peter, Paul and Bamabas.

Monuments etc. On the east face of the chancel arch are two pretty little grave slabs, which are good instances of the fact that the size of the slab has no reference to the age of the individual, the floor space of the tiny church being limited. They probably commemorate early Ponsonbys. In the chancel is a brass to a former lady of the Abbey, the inscription which is difficult to read runs thus:-
“Here lyeth the bodye of Frances Patryckson daughter to Sir Thomas Whyet Knight one of the most honourable pryve Councell to King henerye the VIII Some time wyfe of Thomas Lighe of Calder & at the day of her death wyfe of William patryckson gentleman God gave this wyfe a mynde to pray in grones and pangs of deth & to heaven elevating hands and eyes smilinglye to yeld breth and thus at the age of lvi to grave she toke her waye God grant that she & we mete in joye at the last daye She dyed the xvi of Julii in the yere of our Lord 1578.”

In the Sanctuary is a monument of Thomas Curwen of Sella Park, 1653 with quaint figures symbolising labour and rest. It is surrounded by a carved stone with dog tooth ornament of much older date. The arms are Curwen, quartering Brun, impaling Sanderson. The Piscina, which was found in the churchyard during building operations, can be seen.

The Cross. The remains of the base of a cross will be noticed in the churchyard. This is considered by archaeologists to have been a socketed shaft of red sandstone circa 1200 which is contemporary with a group of crosses of the same period in this area.

The Moat. The protective ditch round the churchyard was built to prevent animalds grazing in the churchyard. There is no evidence to show it was constructed other than for this purpose.